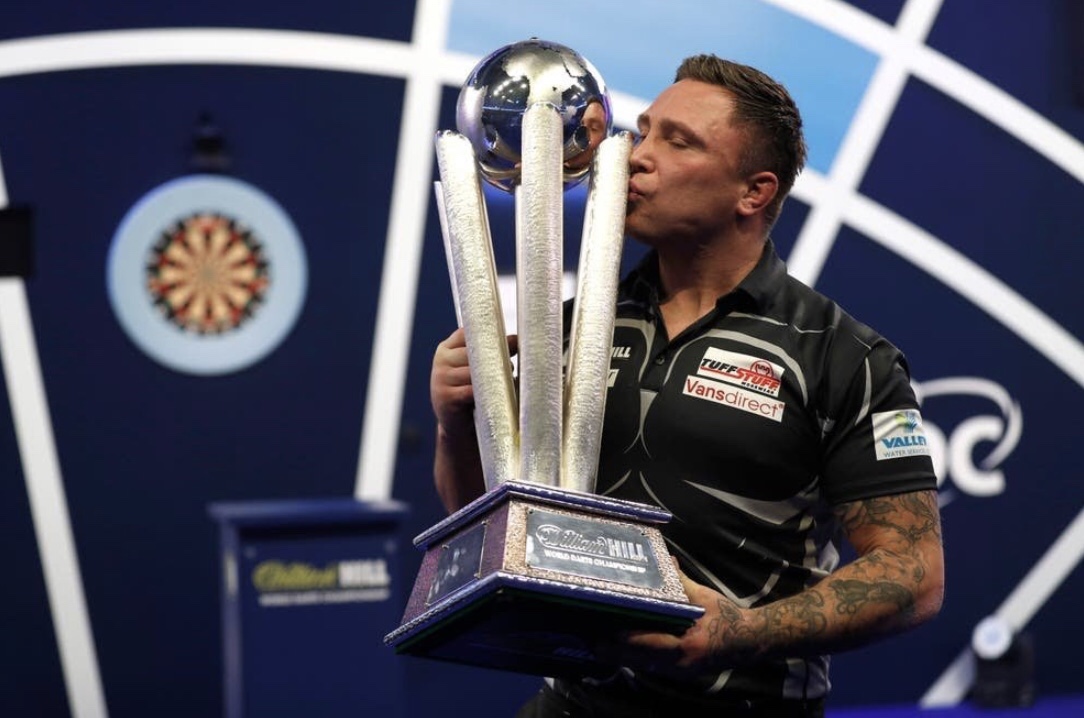 Seven years after turning professional, Gerwyn Price can now lay his hands on the prestigious Sid Waddell trophy, becoming only the fifth ever Welshman to be crowned World Darts Champion.

It was a rivalry renewed as the fiery and brash Welshman Price would encounter the far more restrained and efficient Scotsman Gary Anderson, as such the clash of styles and temperaments made this showpiece final fascinating viewing.

The match itself played out in nerve jangling fashion as The Iceman failed to keep his cool on countless occasions, missing a total of eleven championship darts which saw his Opponent Gary Anderson begin to reel in the 35 year old Price who continually failed to grasp the opportunities handed to him.

With the final score reading 7-3 in Price’s favour it would seem that this victory was fairly straight forward on the surface. It was certainly anything but that however, as this contest of the highest quality made for riveting viewing as the pendulum of momentum swung from one player to the other.

Price himself recorded a stratospheric 3 dart average of 136 in one set, setting the highest ever average for one set in the process. With a demolition job firmly on the cards it seemed the coronation of Price as the new king of the oche was looming large on the horizon.

However, as the final stretch on the road home beckoned, the Welshman began to show sure fire signs of nerves and trepidation as the enormity of his achievements came into view.

The man who had scarcely missed a double throughout the entire evening began to waiver as each match dart hung like a stone around his sizeable neck.

As each arrow agonisingly slipped through his fingers it was the Flying Scotsman Gary Anderson who punished the Welshman time and again, registering two sets on the bounce to make it 6-3 on the night and a third beckoned to leave the score at 6-4.

As the tungsten tension reached boiling point it was Gary Anderson who failed to capitalize on Price’s late Christmas gift, this time missing 3 darts himself at double sixteen. Price could breathe once again and the Welshman finally kept his composure to realise his dream by checking out double five to become World Champion and land the winners purse of £500,000.

“I’ve never felt pressure like that in my life, that was tough to hit that winning double, how Michael Van Gerwen, Peter Wright and other people make it look so easy its crazy, that was tough.”

Price’s ascendancy to the top of the sport marks a remarkable rise as he won his tour card at Q school in 2014. Having left a successful career in Rugby union and rugby league behind, he decided to shift his focus towards his darting dreams and ambitions.

It is a decision that has paid off in abundance for the former doorman and in capturing the World title in his first attempt he has now removed his Dutch rival Michael Van Gerwen from the throne as world number one.

Price by his own admission had courted this prize for a long time and it is no mean feat as Van Gerwen has routinely dominated the sport for long periods. But it now seems that it is Gerwyn Price’s time to showcase his prowess in a sport that is so competitive across the board.

To hold the accolade of world number one takes dedication, heart and desire over sustained periods as you must amass the required ranking points to place yourself at the head of this table.

It is clear that Price has that passion and fervor for the game in abundance, you certainly need to look no further than his emotional and passionate outbursts whilst on stage, which can cause upset to both spectators and rival players alike.

His colorful past as a competitive Rugby player and bouncer could perhaps provide us with an insight into why Price harbors such aggression on occasion, as both professions require a domineering presence in order to be a success.

I believe that the Welshman brings these bruising attributes of his psyche to the forefront on the oche because he simply cannot be anyone else, it is deep rooted in mental make up to have an inner warrior that becomes unleashed when faced with competition. I would therefore suggest that the marking of a maximum 180 or a crucial check out with his now trademark roar is simply a show of his desire to succeed and a love for his craft.

I feel that many may have misconstrued his attitude as confrontational and aggressive as Michael Van Gerwen on many occasions has shown his propensity to celebrate wildly on stage throughout his matches as world number one for seven long years. Yet it seems to me he does not court as much criticism, so I do feel that it is unjust to lambaste Gerwyn Price for his similar actions.

Some players are seen resorting to cheap and underhand tactics in order to find victory, and to do so in the cheapest manor is a far greater misdemeanor in my eyes. This has been evident throughout the years in Darts and is not something myself and many other fans of the game can condone.

Gary Anderson versus Mensur Suljovic was a prime example in the earlier rounds of this very tournament, as the Austrian’s slow play and bizarre behavior riled the Scotsman to such a degree he declared he would rather quit the game than continue playing in such a manner.

There is no such sly undertone with Gerwyn Price as what you see is what you get and Anderson faced no such needle in the final against his opponent, just a man who had his heart and mind set on realising a sporting dream.

With that appetite for success does come an intensity that sometimes spills over, but I cannot see an issue with displaying your emotions in a thrilling sport that thrives on the ability to hold your nerve under excruciating pressure at times. The topsy turvy ebb and flow of matches makes many match up’s pure theatre that can leave us emotionally exhausted when the sport is at its very finest.

Ultimately what we have seen in the last three weeks at Alexandra Palace has been a fabulous showcase for the sport of Darts that continues to grow exponentially every year.

The lack of spectators has been pushed into the background by the pure drama of each and every session as a slew of big guns fell to the wayside in the early rounds, including the reigning champion Peter Wright in a seven set thriller against Gabriel Clemens.

Who can also forget the Dave Chisnall masterclass against Michael Van Gerwen in the quarter finals. We watched on awestruck as Chizzy’s 107 three dart average laid the x3 World Champion to waste in a 5-0 whitewash.

These magical moments amongst many others lit up our tv screens in a spectacular championship, and in what are currently some dark times with the ongoing pandemic, this tournament served as a welcome break from the new normal.

We were reminded of the joy and passion that live sport can evoke from both us the fans and the competitors themselves, and for an action packed three weeks I can only offer my gratitude and thanks to all the PDC staff and players that put on such a memorable show.

The Iceman is no doubt a worthy and deserving winner, and to reach such monumental heights with a career very much in its infancy is something to be greatly admired.

Thus, the impending battle to hold onto his new found status as world number one will create an epic backdrop for an already exciting season ahead for 2021.

For further articles click on any of the links down below or use the menu button at the head of this page.